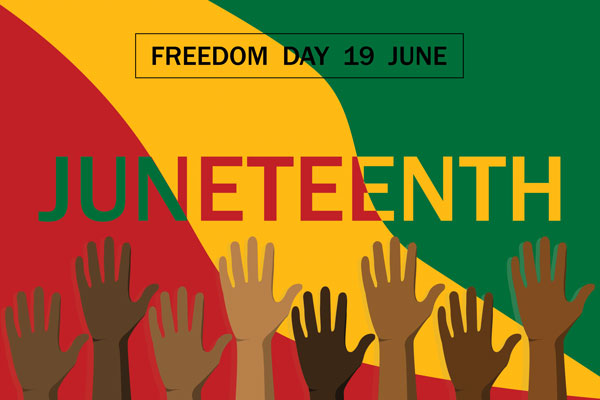 Juneteenth – A Time for Reflection and Celebration

Contrary to what many of us were taught in school, the Emancipation Proclamation didn’t instantly end slavery. As Northern Troops advanced into the Confederate South, many enslaved people fled behind Union lines – but Texas saw very little fighting and almost no Union occupation. This meant that slavery in Texas continued, almost completely unaffected.

So on June 19th, 1865, General Granger stood firmly on Texas soil and read General Orders No. 3, “The people of Texas are informed that, in accordance with a proclamation from the Executive of the United States, all slaves are free.” This was the signal for freedom for Texas’s 250,000 enslaved people – which made up nearly half of Texas’s population at the time. Even then, in some cases, enslavers withheld the information until after the harvest season. But for enslaved black people who were informed, celebrations broke out, and Juneteenth was born. 7 months later, in December of 1865, the 13th Amendment was passed through ratification of 27 of the 36 states, and slavery in America was formally abolished.

As big of a deal as the freedom of enslaved people was, it would take another 114 years for Juneteenth to become an official holiday recognized by a government, with Texas declaring it an official holiday in 1979. Another 42 years later, Congress passed a resolution establishing Juneteenth as a national holiday, and President Biden signed it into law. For the first time in history, Juneteenth was now an official federal holiday.

Today, Juneteenth is a time for celebration. Commemorations around the country feature music, barbecues, prayer services, and other traditional activities that have been spread throughout the migration of Black people from Texas to other parts of the country throughout history.

But Juneteenth is also a time for reflection. It is an opportunity to discuss with our community and children the atrocities of slavery, the inequalities that black people have faced throughout history, and what it means to truly be free. So today, and tomorrow (June 20th, 2022 – the official federal day of recognition this year), take a moment to consider how far we’ve come as a nation, and how much further there is to go.